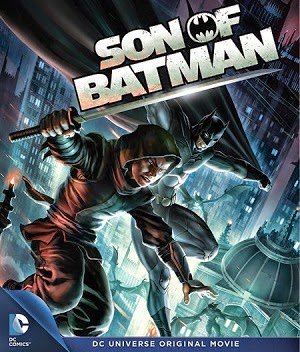 The world is turned upside down when Batman – one of the world’s greatest Super Heroes – discovers he is a father in the newest DC Universe Original Animated Movie, Son of Batman.
Batman learns he has a son, Damian – and to further complicate matters, the mother is Talia al Ghul, daughter of one of his most dreaded enemies, Ra’s Al Ghul. When the odds quickly turn against Batman and Damian, Batman must become both father and mentor to the aggressive, agile new Robin. Together they form an uneasy alliance to try and thwart the criminal enterprise of Deathstroke.
Via DC Comics

I have been able to see this DC animated movie before its release date of May 6th here is my general thoughts and non spoiler review. 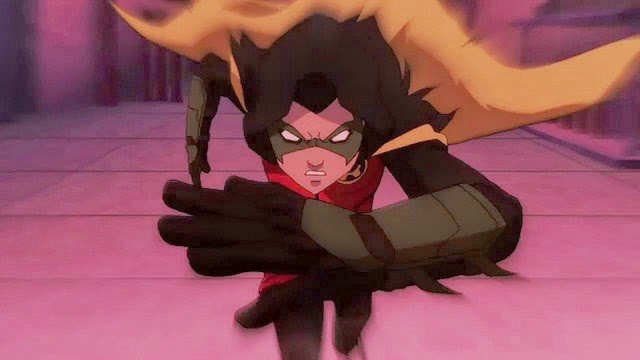 I have made it clear before that I am a big DC fan. This is especially so of anything Batman related. To be honest when I first heard that this was the next of the DC animated movies I had reservations. I'm not a big fan of Damian Wayne, but I am getting ahead of myself. Let's stick to the script given to us. DC animated universe is slowly jumping over to the New 52 Comic line.

The style that used in this film lines up with what has been used in the latest DC animated movies. From Flashpoint Paradox to Justice League War. They are going to more of an Anime type style, including the use of blood. It is not overly excessive, but if you are not accustomed to this style of film you will notice it. It is dark and well done, what you would expect from a Batman movie.

As far as stories go this one is only similar to the comics by having Damian the son of Batman and Talia Al Ghul. It hints at the origin of the 'HOW' and 'WHY' without being overly complicated, or lude. The whole point of Damian is Legacy. Whether it is from the viewpoint of Ra's Al Ghul, or that of Bruce Wayne. Without the risk of giving everything away, there is a new player in tow, Deathstroke. He shows up at the beginning of the movie and shows that he is the antagonist that Batman and Robin need to defeat. Yes Damian is the new Robin.
Nightwing is in the story also. At one point Damian asks him if the Robin suit used to be his, he responds by telling Damian it still is his. This is a Robin story, not Batman and Robin. That being said it is no surprise that Batman takes a back seat to the story. He is the new Father figure that has different methods to dealing with vengeance than that of a boy raised in the League of Assassins. Deathstroke comes across as an decent advisory, but I have a few issues I will pick up on next. 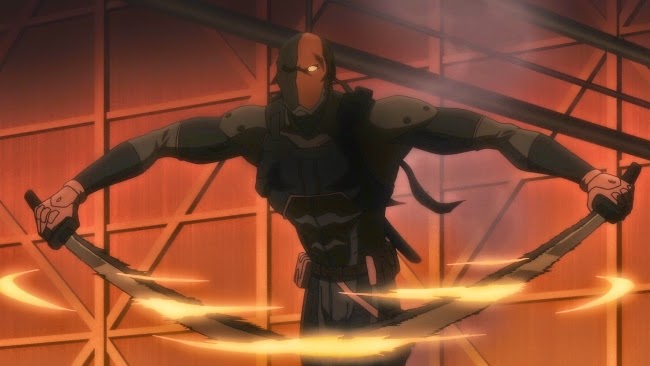 I have a few quarrels with the casting in this one. Batman is again voiced by Jason O'Mara. This keeps this movie tied to what DC is doing with its all its animated movies, making them more New 52 and keeping the same voice talent. I have grown used to hearing him, and he has seemed to improve over time.
Ra's Al Ghul is Voiced by Giancarlo Esposito known best as 'Gus' on breaking bad. The performance was a little dry. I mainly blame the script. The lines he was given seemed empty. Ra's is a bigger than life persona, that needs to flow not only from how he looks, but what he says as well.
Deathstroke is voiced by Thomas Gibson of Criminal Minds fame. I might be biased, but I have grown accustomed to hearing Manu Bennett in the roll on Arrow. Also Ron Perlman did his voice on Teen Titans and Flashpoint Paradox. So I expected more, but with that being said it is a minor detail that after the first few lines I ignored.
Sean Maher of Firefly and recently Arrow fame, Voices Nightwing. He comes across as believable. He is not a major player, but adds to some of the character development of Damian, not to mention some kick butt action when he is shown.
As I stated at the beginning of the post Damian is not my favourite Robin, but I found that I rather enjoyed Stuart Allan as the new Boy Wonder. He brought enough pride, pomp and circumstance to the part that made me actually like the character.

There are quite a few fighting scenes in this movie. Most are well done. Batman has to remind his new protege that they don't use swords, they don't Kill! Like with all Batman related movies with sidekicks, will they listen, will they learn there is another way for vengence other than murder for murder. Damian being a trained assassin is quite capable of defending himself. There is one fight that actually is not shown, only the end result making you want more, and wondering how it turned out the way it did. If you watch all the credits it teases you with scenes of this fight. It might have been for times sake, or just a way of showing it in a different light.

This is one in the long line of DC animated movies, but it can be taken as a standalone piece. The Animation  is steller, place that with the story of a father and son dynamic that you have not seen in a Batman movie before. I can say that although it might have its flaws, what movie does not. It is the ability to look past those and see the movie for what it is. A story of Legacy. As long as Ra's Al Ghul looked for that successor he could never find it. Not even in the Dark Knight himself who Ra's wanted so badly to be his replacement. Batman had a Robin that became Nightwing, after he pushed him too far. With the introduction of Damian to him he now has a true son and Legacy to leave behind, but this is only the beginning.

Son of Batman will be released on May 6th, 2014 on Blu-ray Combo Pack, DVD, and Digital Download.

Will you see the movie when it comes out?
What did you think of the trailer and clips?