Summer Anime 2015 Guide: What I have seen so far

I am basing my opinions on only the first episodes. This is intended to be a summary of what I have started watching. If you want an all inclusive list, and preview review head over to Anime News Network

All Plot Summaries will come from
animenewsnetwork.com

Snow White with the Red Hair 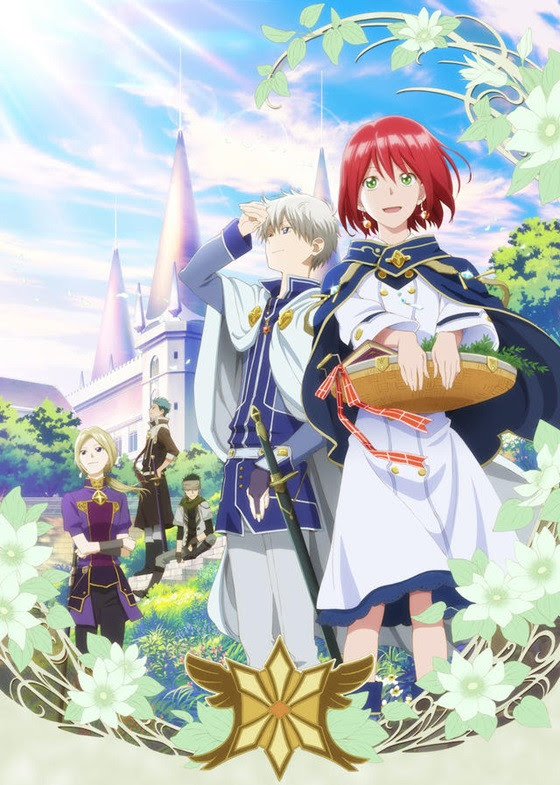 Plot Summary: Shirayuki is a beautiful girl working as a medicine woman with red hair, a color that is considered very rare. When she is proposed and chased after by the prince of her country, she cuts her hair and runs away, only to meet Zen, the prince of a neighboring country. Finding respect for the young man, she decides to serve at his side as his court doctor.

If Disney made Anime this would be it, minus the singing. This is a retelling of Snow White that knows it is a retelling. It makes fun of the fact that we all know the story by introducing familiar situations, then twisting them a whole new direction. 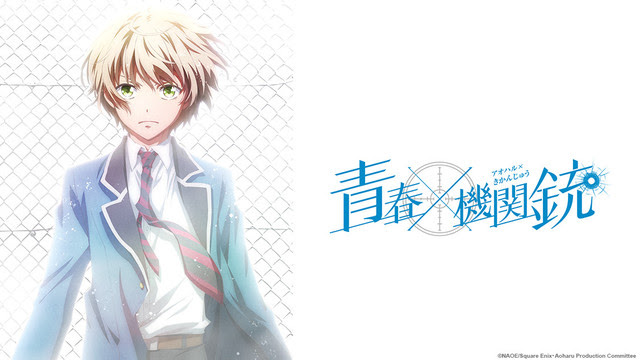 Plot Summary: Hotaru Tachibana is a girl disguised as a boy. Through strange circumstances she finds herself drawn into the world of survival games by a host, Masamune Matsuoka. The two form a team with ero-manga artist Tohru Yukimura and aim to be the be the best in Japan.

So if you don't read the Plot Summary before seeing the episode, (this is what I did) you go in and wonder what is up with this guy? Then you find out he is a she, and it all makes sense...well not realy. The show plays with the roll reversal pretty well. It shows that girls, she is in high school after all, can be tough and be the protector of the weak. The survival games are similar to paint gun games played with plastic beads instead of paint balls. 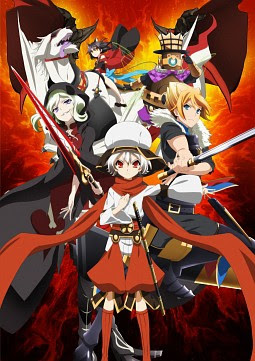 Plot Summary: In the sparkling era year 3015, the great nations Donatia and Kouran divided the world in a cold war as they fight for supremacy. In the middle of this standoff is island country Nil Kamui, which has lost its independence.

This plot summery sounds simple enough, but the story seems to go all over the place. Once we get to the climax it is clear how things will go for the episode and the rest of the season. I've read that it is based on a RPG done by five different people. That being said I can see how it was a little hard to follow at first. 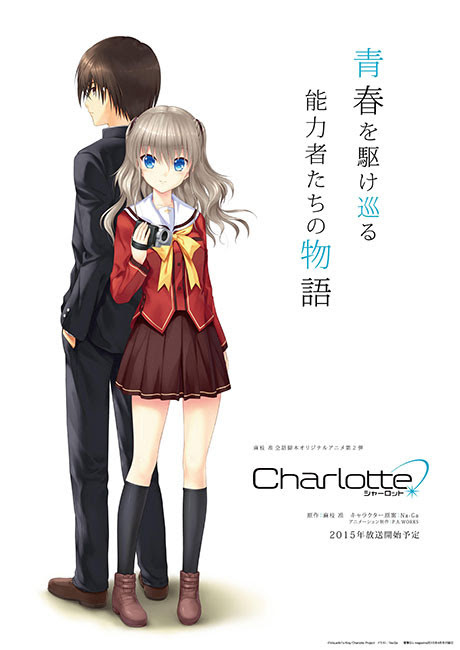 Plot Summary: Special abilities occur among a small percentage of boys and girls in puberty. Yū Otosaka uses his power without others knowing, and lives a fairly normal, average school life. Before him suddenly appears a girl, Nao Tomori. Due to his meeting with her, the fate of special power-users will be exposed.

For a show with a female name as the title, it starts by focusing on Yu Otosaka the male. Basically he uses his powers for selfish gain. Taking on bullies, cheating on test, and of course picking up girls. A female with special abilities does show up near the end of the show, and puts him in his place.

Plot Summary: In the crime-ridden, mafia-governed city of Ergastulum, Worick and Nicolas are two "handymen" known as "Benriya" who would take any dirty job from either police or mafia -- for a good price. After an assignment from police the two met and later joined by Alex, a former prostitute who got interested in the mysterious background of the team, in particular of Nicolas' abilities.

If Gotham didn't have Batman it would be ran just like Ergastulum.
Fortunately this Gangsta city has Nicolas and Worick. One a eyepatch gun toader, the other a silent but deadly sword user. The is an adult themed anime all the way. It kinda has a Sin City feel to it.

Plot Summary: A gate appears in Tokyo's Ginza district sometime in the 21st century. From the gate pours out monsters, knights from middle-age Europe, and other fantasy-like beings, and they kill many of the citizens of Tokyo. This event is known as the Ginza Incident. The government sends a small group of soldiers from the Japanese Self-Defense Forces to the alternate world beyond the gate. Led by otaku soldier Yōji, they find that the villages in the world are being attacked by a dragon. An elf girl who is a survivor from the dragon's rampage joins the group in their travels across the dangerous new world.

Do you like RPG, do you play fantasy video games and watch anime? Then you can lead an army into battle! I always love when anime makes fun of otaku's. The only complaint for this particular episode is it is spent in Japan and doesn't get to explore the the other world. 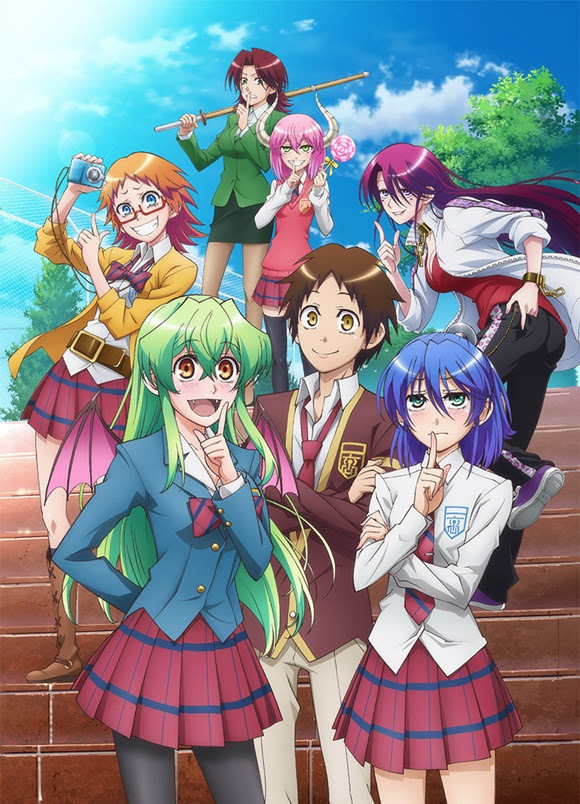 Plot Summary: Asahi Kuromine has a crush on a cute girl named Yōko Shiragami. Shiragami just happens to be a vampire. Asahi cannot keep a secret, but he is determined to keep Shiragami's secret anyways.

Did you ever know someone that you could just read so well that it was impossible for them to lie or keep a secret? Well that is Asahi Kuromine.
He is so inept at containing his feelings that his friends call him a "leaky basket". This looks to be a funny romcom with a twist of the supernatural.

Plot Summary: The everyday lives of the nine super-powered siblings of the royal family are monitored by more than 200 surveillance cameras and broadcast nationwide. The people of the nation who are watching the broadcast will have the ability to elect the next monarch. Akane is the third-oldest sister who can manipulate gravity. She is shy and desperately does not want to be caught on camera.

Someone needs to tell this king how he got all these kids. Nine sounds a bit much. I found out how I got my two and quit. The nice thing is the royal family acts like the commoners. They go to school with everyone else, mom cooks dinner and everyone eats together at the table. I can't even get mine to do that. The whole being elected the next King, or Queen is based on what amounts to a reality TV show. The popular one wins the crown. It is an interesting concept that maybe one day will be incorporated into how we elect officials. 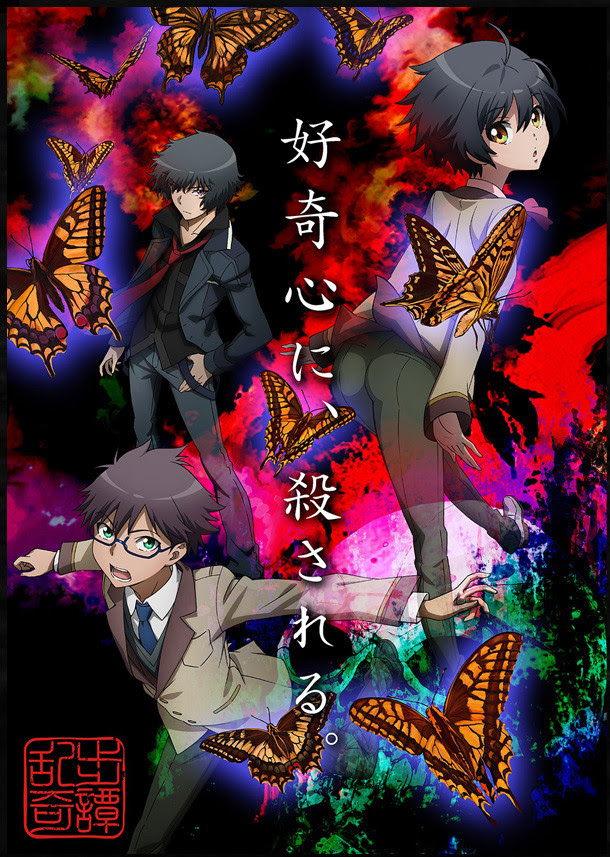 Plot Summary: The story takes place at a certain middle school where several murder cases take place. Kobayashi, a boy who goes to this school, meets genius detective Akechi, who comes to the school to investigate. Kobayashi takes an interest in Akechi and, in spite of his friend Hashiba's worries, he volunteers to be Akechi's assistant.

Kobayashi lives in a world of grey. Nothing seems to excite him. Then he wakes up to find his teacher stylistically murdered in front of him, and the murder weapon in his hand. If you like horror mysteries, then this is the one for you.

Rokka: Braves of the Six Flowers 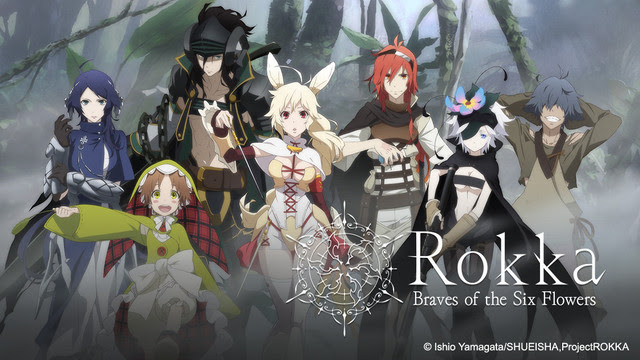 Plot Summary: When the Majin awoke from the depths of darkness, the deity of fate chose six heroes and bequeathed them with the power to save the world. Adlet, a boy who proclaims himself the strongest on Earth, was selected among the Rokka no Yūsha (Braves of the Six Flowers), and he goes to the rendezvous point — but seven have gathered there. The heroes suspect that someone among the seven is the enemy, and the initial suspicion falls on Adlet.

This is a story of a demon that awakens every 300 years or so to devour the land.
The Goddess of the flower selects and places a seal on the six heroes that will stop the demon Majin. The fighting style in this episode is beautiful. Unlike most anime the location is not feudal Japan or medieval Europe, but Mesoamerica. The temples and architecture look like that of the Aztec and Mayans. This episode only deals with the calling of Adlet, and him leaving to rondeview with the other Braves.

I will stop here for now. There are a few that I can add latter, and some I still have not watched yet. If you have any questions feel free to ask in the comments.

You can catch these and other shows in simulcast at Crunchyroll

To see what I am watching or what I have watched you can click on Bell the white haired anime character on the side at any time.