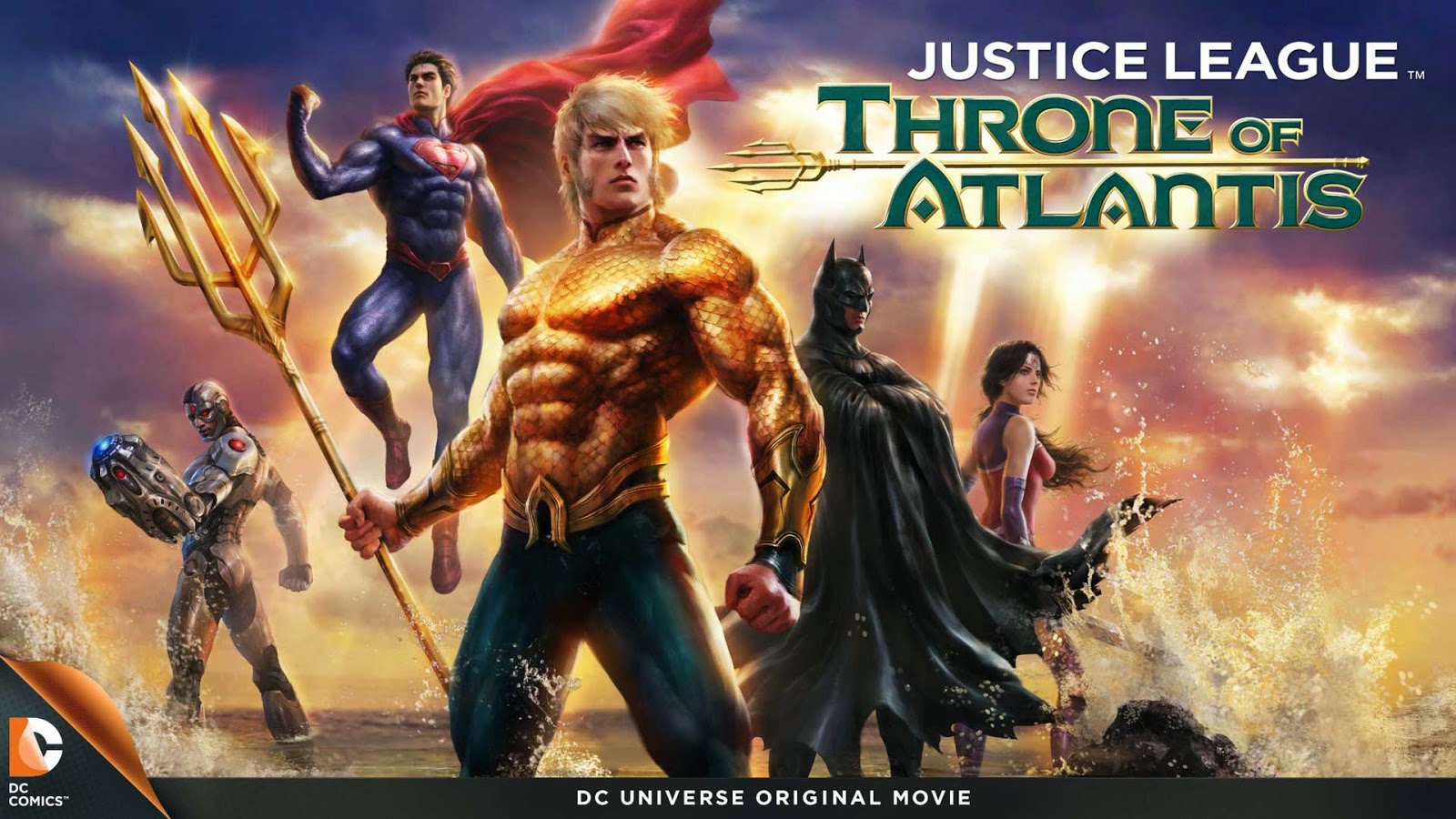 The DC animated universe has a new release
Justice League: Throne of Atlantis

I will attempt to give a spoiler free review after the jump.

This is a continuation of the DC Animated universe, that started with Justice League: WAR.
I gave my review on that almost a year ago.

This is an Aquaman movie, as if you couldn't tell from the title. It follows Geoff Johns' take on Aquaman. Here is the blurb from DC:

After their victory over the forces of Darkseid, the heroes of the Justice League face an all new threat – and finds a new ally – in Justice League: Throne of Atlantis, the newest DC Universe Original Movie
Cyborg discovers an imminent threat in the depths of the oceans so powerful that it rallies together the newly formed Justice League. Meanwhile, wandering thousands of feet above the ocean floor is drifter Arthur Curry, a man with strange powers who may be the last chance to bridge the ancient Atlantean world with our own. Superman, Batman, Wonder Woman and the rest of the Justice League must band together as they face off against the warmongering Atlantean Orm, an army of sea creatures, otherworldly weapons and perilous odds. In this all-new epic adventure from the DC Universe, mankind’s only hope of escaping from the darkness lies with the guiding light of a man – Aquaman! 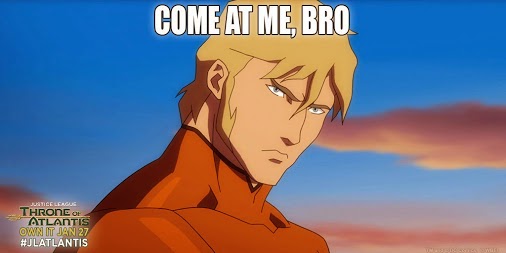 I have never been too keen on Aquaman. Like most I made fun of his powers. *Insert Talks To Fish Joke*
This movie takes that and flushes it down the toilet. He has superhuman strength and endurance, and he can talk to fish... 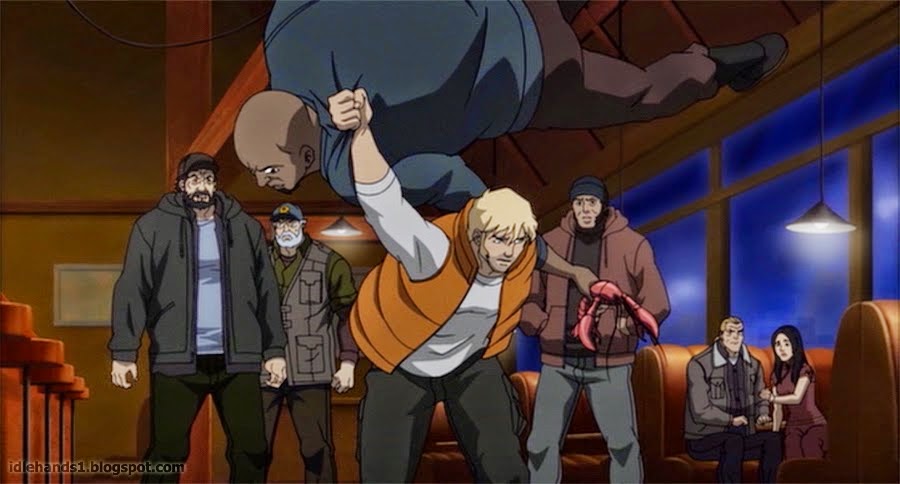 Via Idle Hands
Notice the lobster in his left hand, yeah he was talking to it, and that lead to this brawl.

The characters and the voice actors are what makes this a great watch. It is infused with humor and action similar to how Justice League: War was constructed, but it is not without its faults. 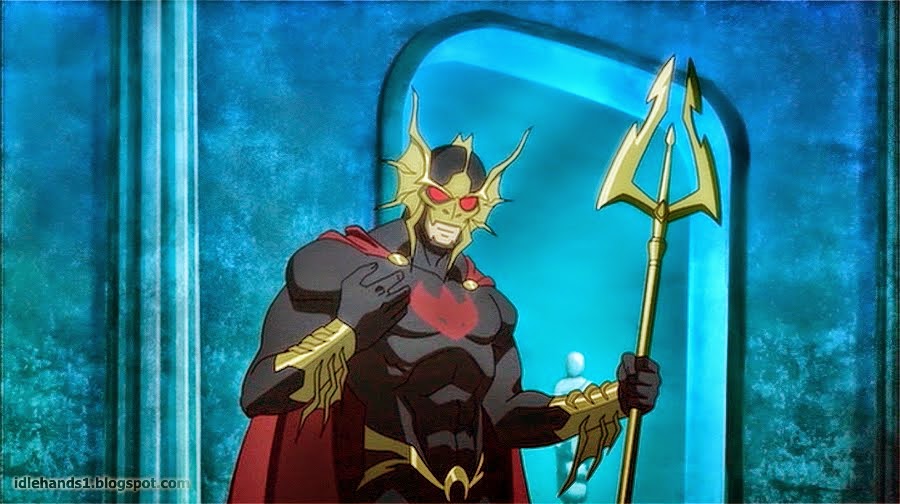 Via Idle Hands
It lacks a true enemy that is a threat. That's not to say Orm/Ocean Master, Aquaman's half brother, is not powerful. He just seems way too eager to take over the world at any price. I have always enjoyed Black Manta as Aquaman's nemesis. He is in the movie, but seems to only fill an arbitrary role as a villain.

It is a waste since Harry Lennix does his voice work. Here is a complete look at voice actors in the film. 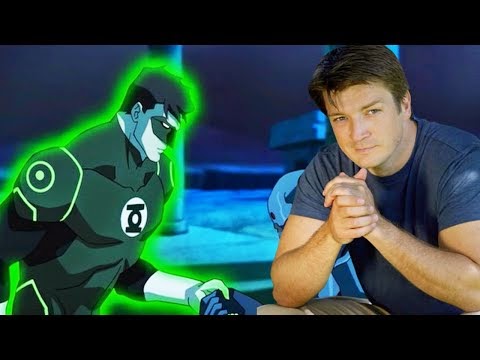 My favourite is Green Lantern he is still the funniest, having Nathan Fillion doing voice is sweet. Or is it Shiny...
If you enjoyed the last DC animated movie your sure to like this one as well.

Here is the trailer and a few clips :

You can watch it now on Google Play or iTunes.
The Blu Ray and DVD will be out on Jan 27th