Who Knows Who, Maybe You...

As I thought of what to name this post a song came on in my mind. Who made who.
So if you can't tell I'm a really big Doctor Who Nerd fan. I have found myself typing away on different sites explaining who I am as a Who fan. Sometimes I find a kindred spirit that has gone the same path as myself. Other Times I find Trols! individuals who are less willing to share a worldview that some of us have been through more than others. With that being said I would like to share that journey.

Many Many Moons ago when I was but a wee lad. (those that really know me, know I was never really wee)  I would on my Telly watch Sesame Street. What does that have to do with Who you ask, I'll get there. PBS was a mainstay for me, with no cartoons except on Saturday morning, it was an escape. At one point I was privileged enough to have my very own TV in my room. I soon found that PBS had other shows I enjoyed other than the usual educational drivel. That led to the discovery of Doctor Who. They would mainly show Tom Baker the 4th Doctor. Sometimes in order sometimes not. The occasional stopping the broadcast to beg for money was annoying, but I was a kid and didn't understand why anyone would want a umbrella, bag, or mug for $45.

Time passed and PBS stopped showing My beloved show. I had already discovered that if I wanted to read the Target book I had to go to the bookstore in the mall and have them special ordered. Why did I go to Waldenbooks and not Target to get target books? Long story short Target was the publishing house name. So what to do to watch my show that I loved so dear? Wait..and Wait!..I tried to find a place I could buy VHS tapes to no avail. Till one day I saw a new video store opened in my mall. (yes, I was a Mall Rat, but that is for a different post) Suncoast offered a variety of videos that no one else did. It was there that I started my collection of Doctor Who videos. 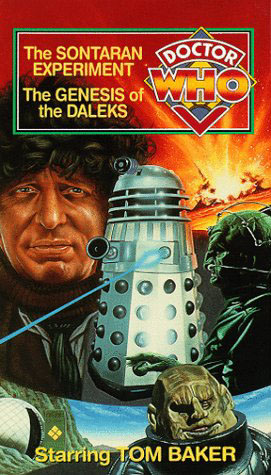 VHS Covers (yes I own these tapes)

This proved to be a little expensive. I found myself only getting Tom Baker or Dalek episodes. Still it was better than nothing. When I went off to College I brought a bunch of tapes with me. I would share my Who with my roommates and suitemates. They in turn would share different movies, Anime with me. Then I had heard that there was going to be a TV movie that would lead into a new series. Finally Doctor Who in America. Well that was my mistake. Thinking that the bigwigs in entertainment would just allow something so British to be shone on regular American TVs. After all we had plenty of British TV on PBS with Are You Being Served?, Keeping Up appearances, Mr Bean, & Fawlty Towers to name a few. Don't get me wrong, I would watch all of those shows (mainly with my Parents, again another post) It was not to be, just a one time TV movie, and a shame Paul McGann did an outstanding job. Again I was exiled to no new Who.

Time has a way of taking time. Loneliness is not only felt by fools. Alone I call to ease the pain. Yearning to be held by you,...sorry I was distracted by the soundtrack in my head. I did warn you after the title of the blog ADHD...Anywho, BBC America to the  rescue with NU Who! I have watched and enjoyed all the Nu Who. My family now watches it with me. Although I grow tired of my wife asking about River Song. My wife is no FanGirl, but if she had her way Doctor Who would be the Time traveler's wife! I did like that movie but it's not Doctor Who. I recently was discussing following Doctor Who in the States with someone, and he brought up that it really was a cult type following. Now it has become more mainstream. I see merchandising, that if it was out while I was young, I would have killed for. I go to the Local Comic book shop and I don't just see the IDW comics but all sorts of toys. I remember taking my Luke Skywalker, (the one from ROTJ with the black glove) and making him my Doctor. He looked like Peter Davison to me.
For my Dalek, I had taken the brass part of a lamp, where the turn dial switch is, and somehow constructed a new toy. I never told my dad, as he was looking for that bit to fix the lamp up.

Do you WHO? If so is this story similar?
Posted by Unknown at 2:43 PM